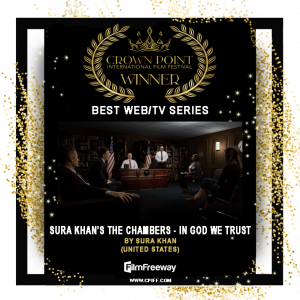 Plus, how you can see the pilot this weekend in Chicago.

The pilot starts with the staff tackling a breaking news story that puts Judge Kimble on the cover of the early edition of the news. Kimble’s Executive assistant Marsha makes a statement while having dinner on a date with Dan, a gentleman Marsha has seen around the court. Still, she is unaware that he is a reporter for the Daily Justice Newspaper. Marsha makes a statement that puts herself and the Judge at the center of controversy in an already challenging political environment. The plot unfolds from there. 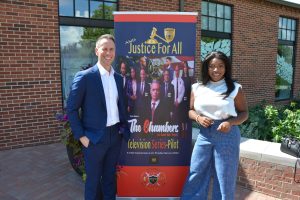 Sura Khan, along with Executive Producer Bobby Bostick and actors Anthony LeDonne and Adra Mayer, will be in Chicago for the Tylerman International Film Festival THIS WEEKEND Aug. 5 – 8, 2022.

“The Chambers” pilot will be shown at Cantigny Park in the Visting Center Theater and Medrill Room from 9 a.m. until 4 p.m. on Saturday, Aug 6, 2022. A Q & A with the cast and crew will immediately follow the screening.

Learn more about this event and how you can join them in this press release. Get all the details on “The Chambers” in our media kit.

Secure an interview with the cast and crew of “The Chambers” by emailing Sara Fruman at sara@soulevolutionmedia.com.

Get more information on “The Chambers” in our media kit. Secure an interview with the cast and crew of “The Chambers” by emailing Sara Fruman at sara@soulevolutionmedia.com. 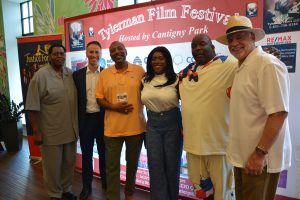