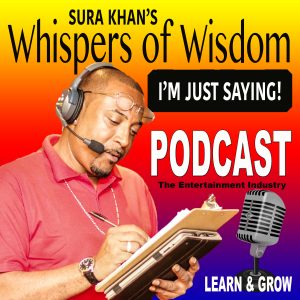 Come to listen to the Podcast and the charming and enchanting voice of entertainment industry veteran Sura Khan as “Sura Khan Media & Productions” bring you weekly and enlightening conversations about the entertainment industry. Sharing his views and inspiring his listeners is with more than thirty years in the entertainment industry. He has crossed paths with some of the best in the industry including: Anthony Anderson (Blackish/ABC) Legendary (Motown) singer Diana Ross, (The Jeffersons TV Series-CBS) Isabel Sanford & Marla Gibbs, (Actor & MDA Telethons) Jerry Lewis, (Empire-Fox) Basher Yazz Grey &  Leslie Uggums, (Fresh Prince of Bel Air-NBC) Virginia Capes, Karen Parson, Tatiana Ali and Alfonzo Ribero, (Power- Starz) Marc John Jefferies, and (Saints & Sinners) Keith Robinson to name a few. Some of the topics will include a conversation on controversial headlines such as Bill Cosby, Rosanne & ABC, Monique & Netflix, as well as basic topics such as, Who’s in the news, The happening behind the scene, and Sura Khan’s signature “I’m Just Saying” Talk.

Be sure to subscribe to this website: www.surakhan.net for announcements updates and links to the podcast that will be issued soon. The podcast will begin airing in September 2018.

Sura Khan exhibits sheer creativity in his work and has been the creative force behind five television shows, three albums and two books, and one film. He has worked in all the major entertainment industry genres, film television, music, and books. His Knowledge-base is extremely widespread and dynamic. Sura Khan believes that visionary leadership is based on a balanced expression of spiritual, mental, emotional and physical dimensions. He is truly a leader who pursues his dreams through a concoction of core values, a clear vision, empowering relationships and innovative actions. Learn more about Sura Khan and view testimonials https://surakhan.net/testimonials also visit the official IMDB: https://www.imdb.com/name/nm8358868/

Listen to the first episode NOW!

If You Miss A Little, You’ll Miss A Lot!

SUPPORT THE PODCAST BY DONATING NOW